The idea for Upwind came from Canada by way of Michael Vowles. Michael, a Canadian, often traveled between the San Francisco Bay Area and British Columbia. He did his flight training at San Carlos, CA and Vancouver, BC, with instructors at each airport who worked together to complete his private pilot training. In late 2012, he brought the idea of a summer scholarship for young people to Dan Dyer, owner of San Carlos Flight Center.

San Carlos Flight Center had opened its doors earlier that year and had begun bringing together pilots, instructors, and aviation enthusiasts from all over the San Francisco Bay Area. The staff and pilots at the Flight Center had an energy and an enthusiasm that had been lacking in general aviation. They tried new things, created new types of pilot events, set high standards for equipment and instruction, and actively sought out ways to share flying with the people of the Peninsula.

It was in that creative environment that Michael and Dan implemented the idea. They quickly brought in pilots Herb Patten and Terry Fiala who formed the core team overseeing the creation of the first Upwind Summer Scholarships in 2013. Under the training of Nariman Farsaie, the first two Upwind Scholarship winners earned their private pilot certificate in August, 2013. In later years, the Upwind management team expanded to include Chris Moropoulos in 2014, John Zasio and Gretchen Kelly in 2015, and Oliver Coolidge, Katy Korsmeyer and Anita Kriek in 2016. The Upwind Board for 2018 includes Oliver Coolidge, Dan Dyer, Kevin Gray, Gretchen Kelly, Herb Patten, Kirk Syme and John Zasio. Summer aviation scholarships to high school students have been awarded every summer since 2013.

During the summer of 2020, the Upwind Foundation awarded scholarships to four (4) high school students. Despite the unprecedented COVID-19 pandemic, all four participated in summer intense ground and flight training in preparation for their checkride in August.

During the summer of 2019, the Upwind Foundation awarded scholarships to four (4) high school students. During the summer all four participated in intense ground and flight training in preparation for their checkride in August.

Ashton Hacke of Half Moon Bay

During the summer of 2018, the Upwind Foundation awarded scholarships to three (3) high school students. During the summer all three participated in intense ground and flight training in preparation for their checkride in August.

During the summer of 2017, the Upwind Foundation awarded scholarships to four (4) high school students. During the summer all four participated in intense ground and flight training in preparation for their checkride in August. All four obtained their private pilot certificate.

During the summer of 2016, the Upwind Foundation awarded scholarships to five (5) high school students with the first ever Upwind helicopter scholarship. During the summer all five participated in intense ground and flight training in preparation for their checkride in August.

Travis Bender is a junior at Sequoia High, Redwood City. He often listened in on air traffic control when lifting off on flights “pretending I was someone in the captain’s seat of a massive airliner, heading to a far-away place.”

Kyle Caverly is a junior at the Army and Navy Academy. Helicopter is in his blood and his friends nicknamed him “Kyle Copter” since he can tell you which helicopter it is by its sound.

Leon Lam is a junior at Independence High, San Jose. Leon wants to serve his community as a volunteer search and rescue mission pilot for the Civil Air Patrol and work towards becoming a commercial pilot.

Michael Salazar is a junior at Capuchino High, San Bruno. Michael’s dad inspired him to pursue a career in aerospace engineering

Patrick Shea is a junior at Carlmont High, San Carlos. “I’ve learned that once you express interest in aviation, many others can relate and assist with your passion.”

During the summer of 2015, the Upwind Foundation awarded scholarships to four (4) high school students. During the summer all four participated in intense ground and flight training in preparation for their checkride in August.

Anthony Bellanti is a junior at Burlingame High School. He is also interested in architecture, and works as a lifeguard for the Burlingame Aquatic Club. “It is a lifelong dream for me to obtain my pilot’s license. It is the only job I forsee myself getting up for in the morning with a smile.”

Michelle Karpishin is a junior at Hillsdale High School. She is a competitive swimmer and has plans to study mechanical or aerospace engineering in college. “Learning to fly will relate to a career that I would love. I hope to contribute to aviation in improving the effectiveness of airplanes, in safety, or the design of crafts for space exploration.”

Evan Isenstein-Brand is a junior at Sequoia High School. “A magical flight in an open-cockpit biplane when I was 8 years old got me hooked on flying, and I haven’t been able to shake the craving for flight since.” Evan works at San Carlos Flight Center as a member of the Flight Line Team. He is also a photojournalist, sharing his interviews, photos, and videos on his web site www.evanflys.com.

Kevin Gray is a junior at Carlmont High School. He enjoys board sports and parkour, and works at Planet Granite. His career goals include becoming a Naval Aviator and an astronaut. “Aviation fascinates me on three levels; the engineering and mathematics, the capability to change lives, and the feeling one gets while flying.” 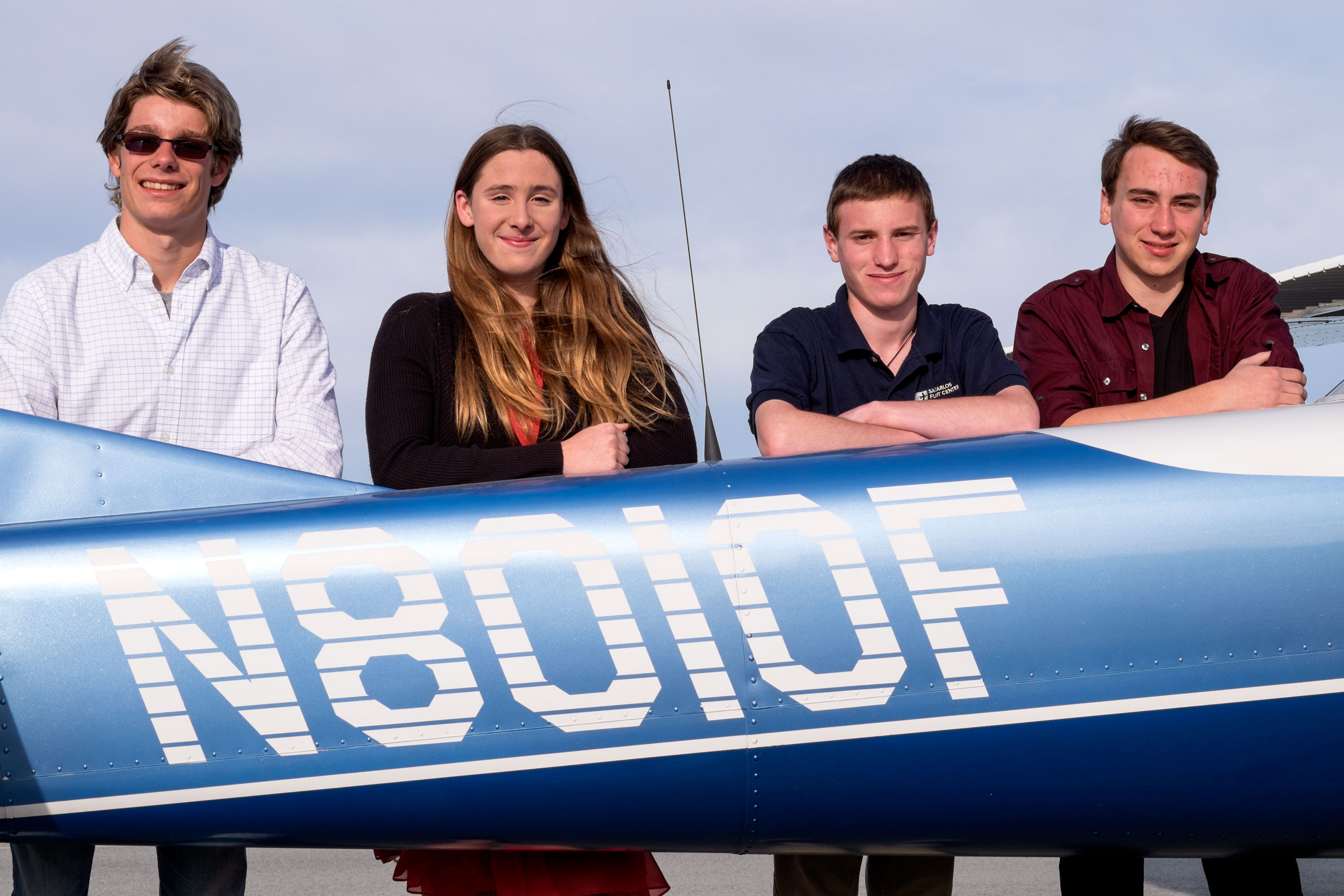 Julie Korsmeyer is a junior at Hillsdale High School and the daughter of Dave and Katy Korsmeyer of San Mateo, CA. Julie is an active volunteer in the community, including stage crew at Abbott Middle School and peer tutor at Hillsdale High School. She also plays the bass clarinet in her high school band. Julie’s interest in aviation began as a young child, with visits to the NASA Ames Research Center and Moffett field with her father.

Stephen Schick is a junior at Aragon High School, and the son of Daniel and Andrea Schick of San Mateo, CA. Stephen is an intern at the office of Congresswoman Jackie Speier, a lifeguard at the Palo Alto YMCA, and has volunteered for the Marine Science Institute. His first flight experience launched his passion for aviation. “The feeling when you lose contact with the ground and lift up into the sky is both awesome and exhilarating.” Stephen has been working toward learning to fly ever since that first experience. 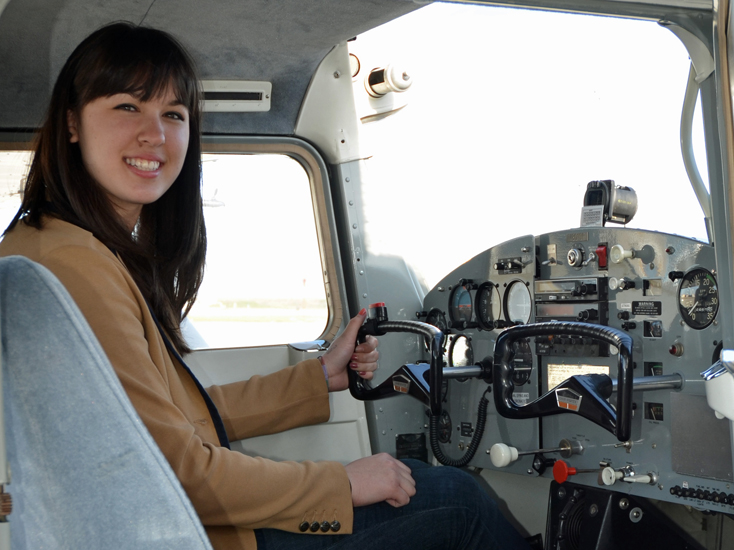 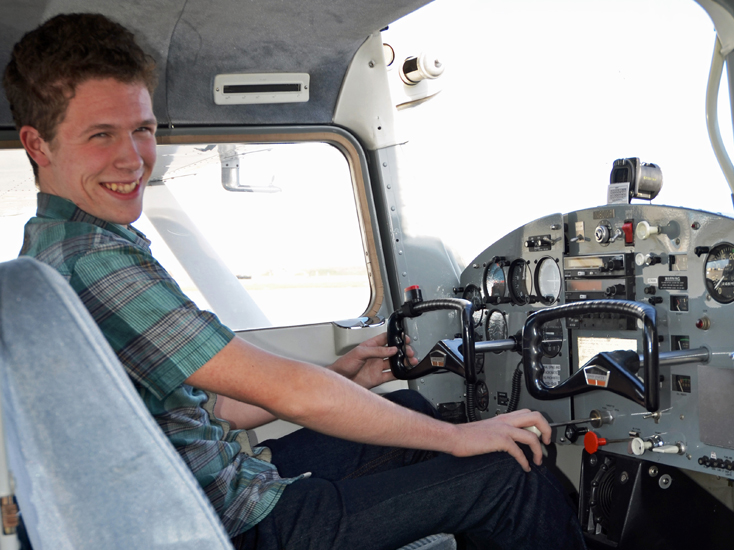 In 2013, two local high school juniors were selected. Eric Dasmalchi (Half Moon Bay, Calif.) and Matt Moropoulos (Belmont, Calif.) both received a scholarship and went on to achieve their Private Pilot Certification later that year.
Eric Dasmalchi was a junior at Half Moon Bay High School and the son of Glenn and Wendy Dasmalchi. Eric is an avid cyclist and is actively involved in the League of Creative Minds, with whom he traveled to China to compete in a Model United Nations conference. Eric was inspired to learn to fly when, at age 12, he was treated to a ride in a Cessna 172. “When the pilot offered the controls to me, I remember saying ‘I have the airplane’ as if it was some magic spell that granted me entry into a whole new world.”

Matt Moropoulos was a junior at Carlmont High School, and the son of Chris Moropoulos and Leigh Herman. Matt is a member and volunteer at Hiller Aviation Museum, a freelance web designer, and competes as a member of his school’s robotics team. Matt’s first flight experience in a 2-seat Kitfox confirmed his passion for aviation. “Seeing and feeling flight from the perspective of a small plane drastically changed how I thought of flying. I immediately felt a unique and personal connection to the aircraft. I saw the world from a new angle and perspective that day and I’ll never forget it.” 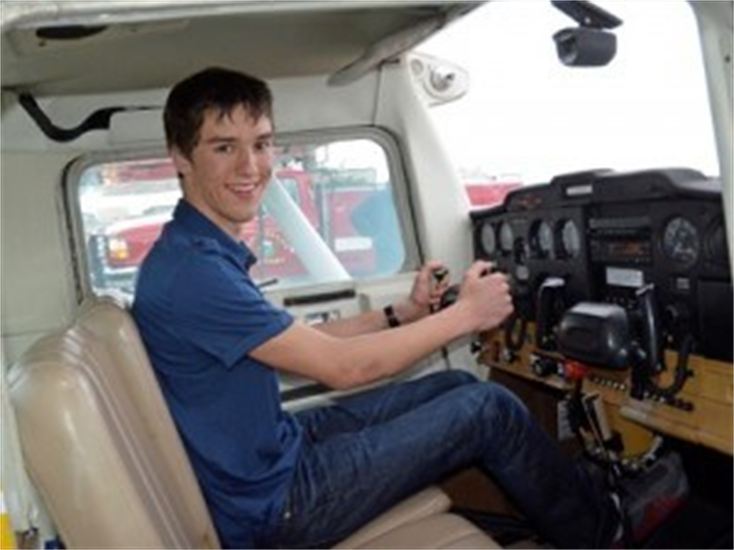 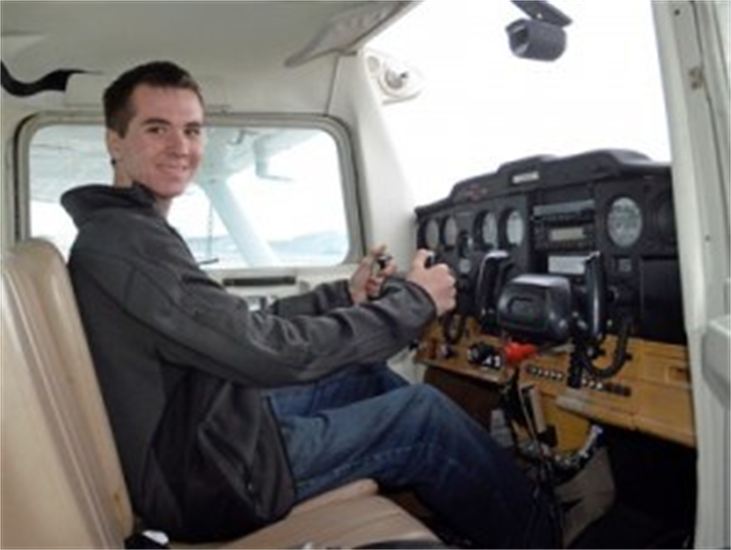